To say that console gaming has advanced a lot in recent years is quite an understatement. This has never been more apparent than in the wake of this year’s E3 2018. While Nintendo continues to play on a whole other level, don’t count out other big names in the console world just yet. Wired UK claims the Xbox is (sort of) back and we agree.

But even before Microsoft showed off a slew of games during their 2-hour E3 show, the Xbox One was the topic of an important announcement. For many gamers, this was just as significant as Microsoft’s Cyberpunk 2077 announcement. After 5 years, the Xbox One is getting a spec boost!

The May updated that took the gaming world by surprise (kind of) added support for 120hz refresh rates to the Xbox One S and One X. The higher refresh rate will be supported not only at 1080p resolution, but 1440p resolution as well. Even better? AMD FreeSync support!

With this update, we still need to manage some expectations. Because technology is, well . . . technology, you’ll still have some choices to make. With our monitors, you can run 120Hz at 1080p resolution. Or you can rock a pixel-perfect 1440p resolution at a 60Hz refresh rate. Even knowing this, you’re now able to enjoy buttery smooth gameplay on one of the most popular game consoles of all time — thanks to FreeSync support.

What does this all mean?

FreeSync, along with 1440p resolution support that was added in the same update (and now 120Hz support), all expand the Xbox One S and Xbox One X’s compatibility with computer monitors.”
— Ars Technica, “The Xbox One will get 120Hz support in a May software update,” 4/24/2018

The refresh rate of your display refers to how many times per second the screen refreshes its image. In this case, the higher the number, the better. Originally, the Xbox One’s refresh rate was capped at 60hz. The higher 120hz refresh rate opens the door for smoother gameplay performance and faster input response.

To take advantage of the update and unlock the Xbox’s new capabilities, you’ll need the right setup. That includes a FreeSync-enabled monitor that accepts 120hz over HDMI.

Viotek’s got you covered. We have the technology. 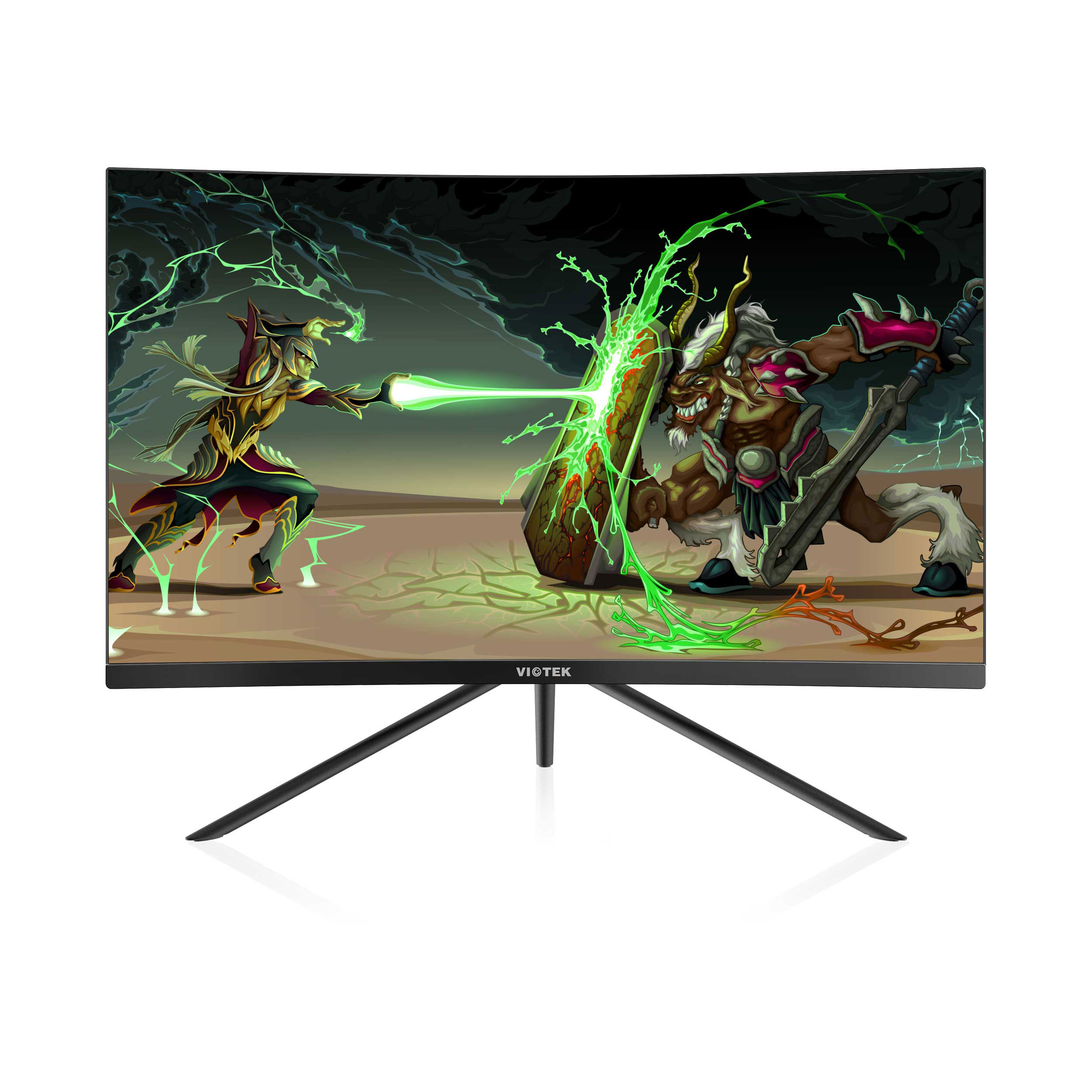 The Microsoft 120hz and FreeSync updates open a whole new world is opening for Xbox One owners. Our entire GN series of monitors will be able to take full advantage of the update. This includes the Viotek GN24C, GN27D, GN32C, GN32Q, GN32LD, and GN35LD monitors. Each monitor supports FreeSync out the box with up to 144hz refresh. (To take advantage of this update, though, you’ll only need 120hz!)

With the specs you need at a price you want, the only thing you’ll have to consider for yourself is monitor size.

Why should I use a Monitor with my Xbox?

Now you can snatch your Xbox out from under the TV and carry it off to your room or den. (Cackling optional for your journey.) And you know how to set everything up for gameplay. But why should you go to the trouble?

Truth bomb: Gaming monitors are made for gameplay. TVs aren’t.

With the latest updates, the Xbox One S and the Xbox One X support 120Hz refresh rates and even AMD’s FreeSync technology. Boiled down, this means your games will look better with a monitor.

Gaming monitors will give you a sharper, faster experience. A TV won’t offer you the same response time [ . . . ] nor will it have as little input lag.
— Windows Central, “Is a PC monitor or TV better for Xbox One gaming?,” 10/17/2017

After all, long lag time in a game could mean a failed mission or quest. A gaming monitor clocking at 120Hz with FreeSync enabled will give you quicker response times than most TVs would. 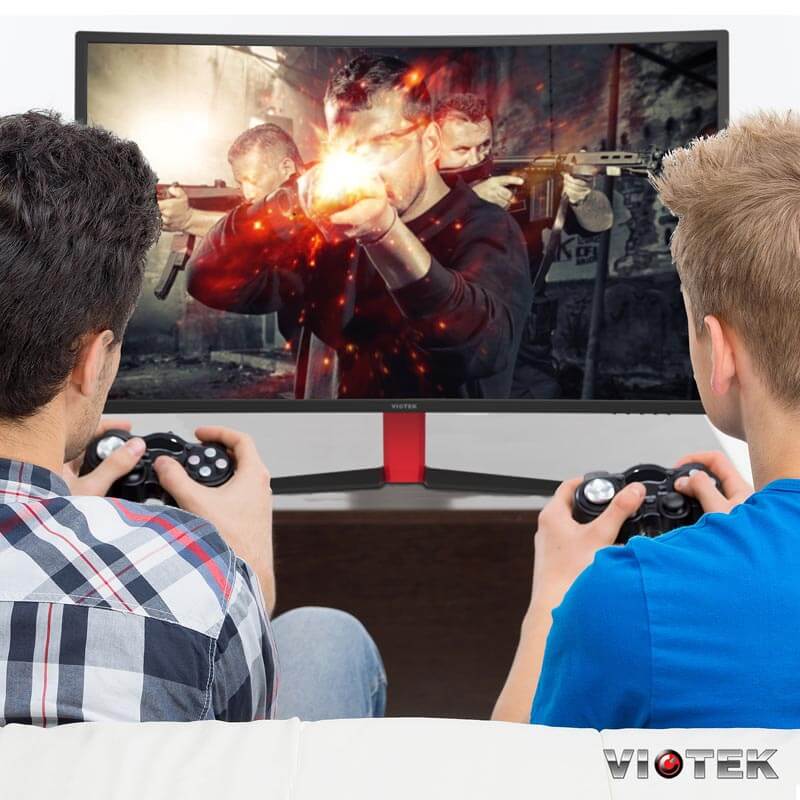 Also, let’s consider resolution. Xbox’s latest update mean better rates for both 1080p and 1440p resolutions. So you’re better off using a monitor. By swapping a large TV out with a monitor will let you sit closer and enjoy every gorgeous detail your games can offer.

Let’s not forget about the curve! Getting up close and personal and opting for a curved monitor will create a sense of immersion that most televisions can’t match.

How do you play Xbox on a monitor?

The newest Xbox update makes a PC monitor unquestionably the best bet for a smooth, beautiful gaming experience. In order to deliver the performance you want, an HDMI connection is essential. It’s something we’re already used to with newer televisions.

But if your monitor doesn’t have an HDMI port, you’ll have to track down an adapter. Fortunately, all Viotek GN series gaming monitors have HDMI ports. Any of them can be used with an Xbox One.

Connect your monitor to your Xbox One using the HDMI cable that came with your monitor or console — the same way as you would a TV. Then go to Display & sound in your Xbox settings and activate 120 Hz.

Still, you have options:

So there you have it. Not only can you play Xbox One S or Xbox One X with a computer monitor, you should! Check out our full line-up gaming monitors and find the one that fits: Viotek GN24C, GN27D, GN32C, GN32Q, GN32LD, and GN35LD. These Viotek monitors are the best option for long-time Xbox fans, gamers that bounce between PC and consoles, newcomers, and more.

Impressive specs at just the right price is hard to come by nowadays, and we’re glad that companies like Viotek exist to compete with the big boys.”
— Monitor Nerds, “Viotek GN32Q Review – Affordable 144Hz 1440P Monitor for Gaming,” 10/17/2017