So you have a graphics card, a reliable CPU and all the RAM that Chrome can eat, but you’re not getting those super-high refresh rates and resolutions that are the envy of your gaming circle. What’s going on, and how can you get the most out of your gaming monitor?

There are three main things that can affect the maximum refresh rate and resolution you can obtain when playing a game:

The higher the refresh rate, the more images are being pushed to the monitor every second. So your computer’s GPU—or the game console—must be built to handle that kind of processing. Older PCs might not be able to “keep up” with the processing that’s being demanded of it. Similarly, a PS4 is built to handle a max of 60Hz (or 60 frames per second FPS). The Xbox One was similarly specced, but then updated to 120Hz in 2018. The PS5 also has a max. refresh rate of 120Hz (or 120 FPS). 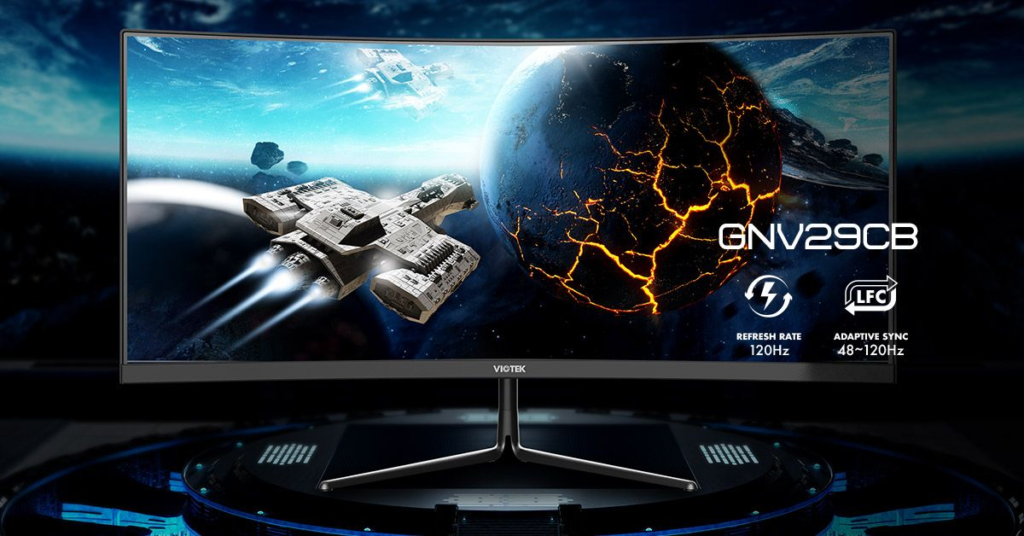 . . . there aren’t that many 120Hz-supported games. If the game isn’t developed (or upgraded) to support higher refresh rates, you won’t be able to experience higher refresh rates—no matter what you do. Same with the resolution. Check with the game developer on the max. refresh rates and resolutions supported by the game. For the most part, having a monitor that supports 240Hz refresh and 4K resolution is simply “future-proofing” your gaming set up. And that’s not a bad thing!

Your GPU/console may be able to support the higher refresh rates and resolutions. Your game may be developed specifically for lightning-fast FPS and 4K resolution. But your monitor only has HDMI 1.4 ports. Well, then you’ve stumbled across another hurdle to overcome. Connection ports—and their respective cables—have limits of their own. 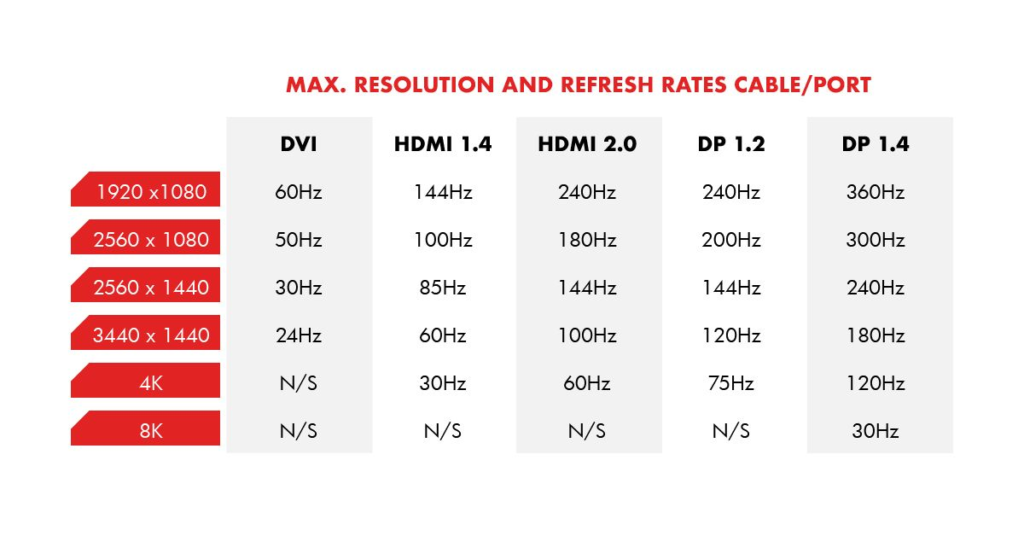 Important info to know to maximize your monitor’s performance.

Resolution is simply the number of pixels on the screen. The more pixels, the more detail. There are numerous different resolutions, but most are some variant of the following four:

And there is 8K. But those monitors cost tens of thousands of dollars. It’s certainly not mainstream yet.

720p is generally the lowest resolution you can get for a standard monitor, and 4K is the highest one in general circulation. You also have monitor variants that are known as ultrawide. This means that there are more pixels on either side of the screen—great if you want a wider field of view.

Having said that, the more pixels on the screen, the harder your graphics card has to work. And it’s the graphics card that usually determines how well the game runs (kind of).

Refresh rate is simple: It’s the number of times an image appears on the screen per second. It’s measured in hertz, and you’ll see everything from 30Hz screens to 240Hz screens.

Refresh rates are important in gaming because the sooner the image appears on the screen, the sooner you can react to it. In addition, the more frames that are being thrown onto the screen per second, the smoother it looks. Screens running at 30Hz generally look a little choppy, whereas gaming screens running at 144Hz look seriously smooth. Professional gaming monitors can typically run as fast as 240Hz.

Again, the more frames per second that are being thrown up onto the screen, the harder the graphics card has to work. There’s also a CPU element involved—some games are more CPU-bound than others. This means that there is no one CPU/GPU combination that works for every game perfectly.

Graphics Cards and All That

So this brings us neatly onto graphics cards. These are the bits of machinery in your computer that process each frame and send it to the screen. There are two key players in this market: NVIDIA and AMD. These are the two companies that manufacture graphics card chips. In many cases, they sell the individual chips to board manufacturers (ASUS, Palit, Zotac and so on), who then make their own boards with that core technology. 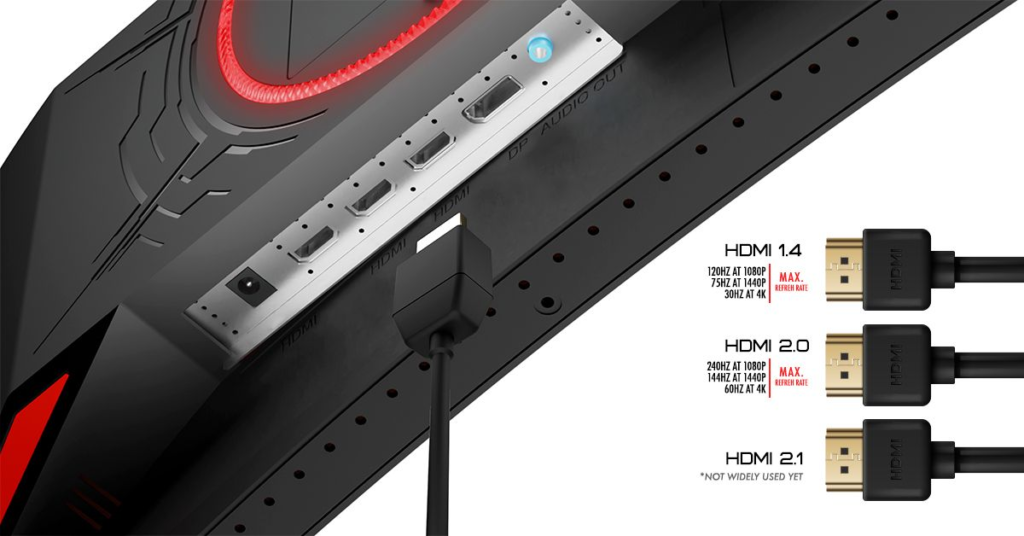 HDMI, the most common cable.

HDMI has traditionally been a bit behind DisplayPort—in performance—but is the dominant standard in the industry. Virtually every TV has an HDMI port or three somewhere, and more cost-effective computer monitors generally run off HDMI as well.

However, there are three main types of HDMI available:

HDMI 2.0 became prevalent for AMD graphics cards around 2015. So if you have a Radeon RX 300 or higher in your system, then you probably have HDMI 2.0.

This standard allows up to 10.2Gbps of bandwidth (how much data it can transfer). The max refresh rate is:

This means that if you are using an HDMI 1.4 port or cable, you will not be able to get great results from an ultra-high-end monitor at high resolutions. (HDMI 1.4 has been around for a long time. If you have an older PC with HDMI 1.4, you may be limited to 60Hz at 1080p.)

This standard allows up to 18Gbps of bandwidth, which essentially doubles the frame rate for each resolution. This means you can get the following refresh rate:

Again, the cables here are vital. Using an HDMI 1.4 cable with an HDMI 2.0 port will work (they’re backwards compatible) but it will hinder your ability to get the maximum refresh rate from your monitor. The limitations of HDMI 1.4 will “win” over 2.0. 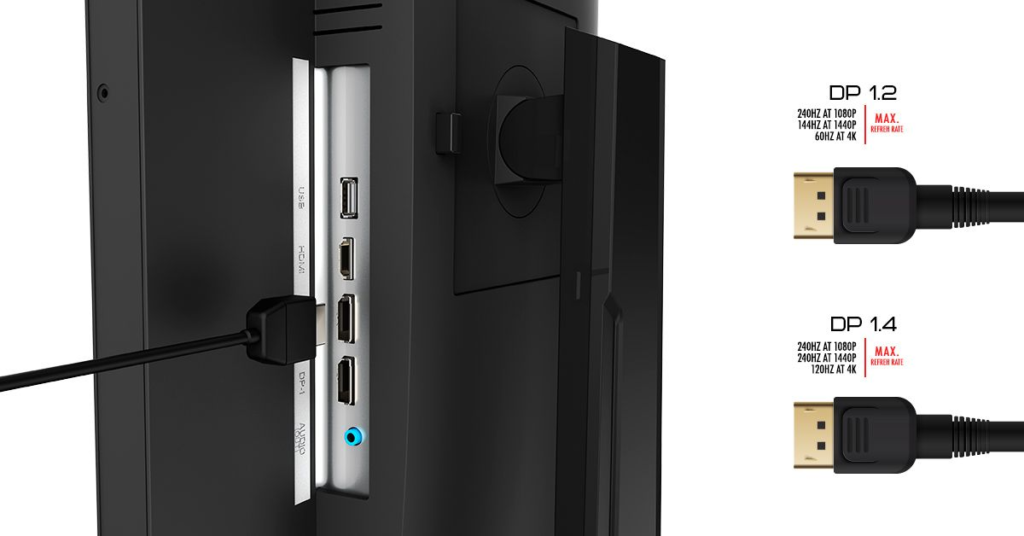 Get the most from your monitor with DisplayPort cables.

DisplayPort is a different standard, and it’s not as common as HDMI. If you try sticking an HDMI connector into a DisplayPort, it’s not going to go well for you—which is unfortunate because they look quite similar when you are fiddling around the back of your computer under your desk.

The two dominant standards for DisplayPort are:

This standard allows for up to 21.6Gbps of bandwidth. This means the max supported refresh rate for each display type is:

DisplayPort 1.4 goes even further, allowing up to 32.40Gbps of total bandwidth. Again, this offers a doubling of the maximum supported at each resolution (apart from 1080p, where there are physical limitations to the refresh rate)

And like HDMI, DP is backwards compatible. So a DP1.2 cable will work with a DP 1.4 port. That said, the DP 1.2 limitations prevail. So don’t expect those same DP 1.4 speeds.

A Note About Adapters

“My laptop/PC has an HDMI port, but my monitor only supports 144Hz over DisplayPort.”

In this situation, you would need to use an active HDMI-to-DP adapter. Adapters have their own limitations, too, and will affect the max. performance. Currently, an HDMI-to-DP adapter only allows up to 120Hz at 1080p resolution only. (Fortunately, this performance is good enough for most game consoles, including Xbox One and the PS5.)

Next, you’ll need to make sure that your computer (or gaming system) and your monitor have the higher-end ports. Then it’s just a matter of using the correct cable. (Don’t expect a DVI cable to knock out 4K resolution at 100Hz, no matter how powerful your PC and monitor are!) It pays to check out what cables you are using and what ports you have available before making a purchase—especially if you are going for high refresh rates.

Flat Monitors vs. Curved Monitors: How to Choose the Best Screen For Your Setup

Are you in the market for a new gaming or everyday computer monitor? There are a lot of great options out there for a variety of prices. In this post, we’re going to answer some...

END_OF_DOCUMENT_TOKEN_TO_BE_REPLACED

Every gaming setup deserves high quality gaming monitors. Video games are an immersive and sometimes otherworldly experience, so it’s vital that your monitor is capable of the best color, frame rate, and resolution possible. Even...

END_OF_DOCUMENT_TOKEN_TO_BE_REPLACED

Do you have a Gamer Dad?  Finding the perfect gift for gamers is as hard as a final boss battle. While you can't go wrong with a new headset, keyboard, or mouse, you may...

END_OF_DOCUMENT_TOKEN_TO_BE_REPLACED

“Dune” tells the story of Paul Atreides, a brilliant and gifted young man born into a great destiny beyond his understanding, who must travel to the most dangerous planet in the universe to ensure...

END_OF_DOCUMENT_TOKEN_TO_BE_REPLACED

Celebrate 20 years of Adventure with the Middle Earth Ultimate Collector’s Edition. Return to the stunning locations and epic adventures in Peter Jackson’s Middle-earth™ saga, now more stunning than ever before - in beautifully...

END_OF_DOCUMENT_TOKEN_TO_BE_REPLACED

While most industries have been hit hard in recent times, the gaming industry has gone from strength to strength. The next generation of consoles is coming into its own, while gaming PCs offer greater...

END_OF_DOCUMENT_TOKEN_TO_BE_REPLACED

When it comes to gaming monitor refresh rates, the mantra is "faster is better!" But is that always true? The human eye can only see the equivalent of 60FPS, so why do we care about...

END_OF_DOCUMENT_TOKEN_TO_BE_REPLACED

Which is The Best Panel Type for Gaming Monitors: TN vs. IPS vs. VA

Which is The Best Panel Type for Gaming Monitors: TN vs. IPS vs. VA When most people go shopping for a gaming monitor, their primary concerns are resolution and refresh rate. Those are certainly important...